A birthstone is a gemstone that represents a person's birth that is usually the month or zodiac sign. Find out what's yours and what it represents. 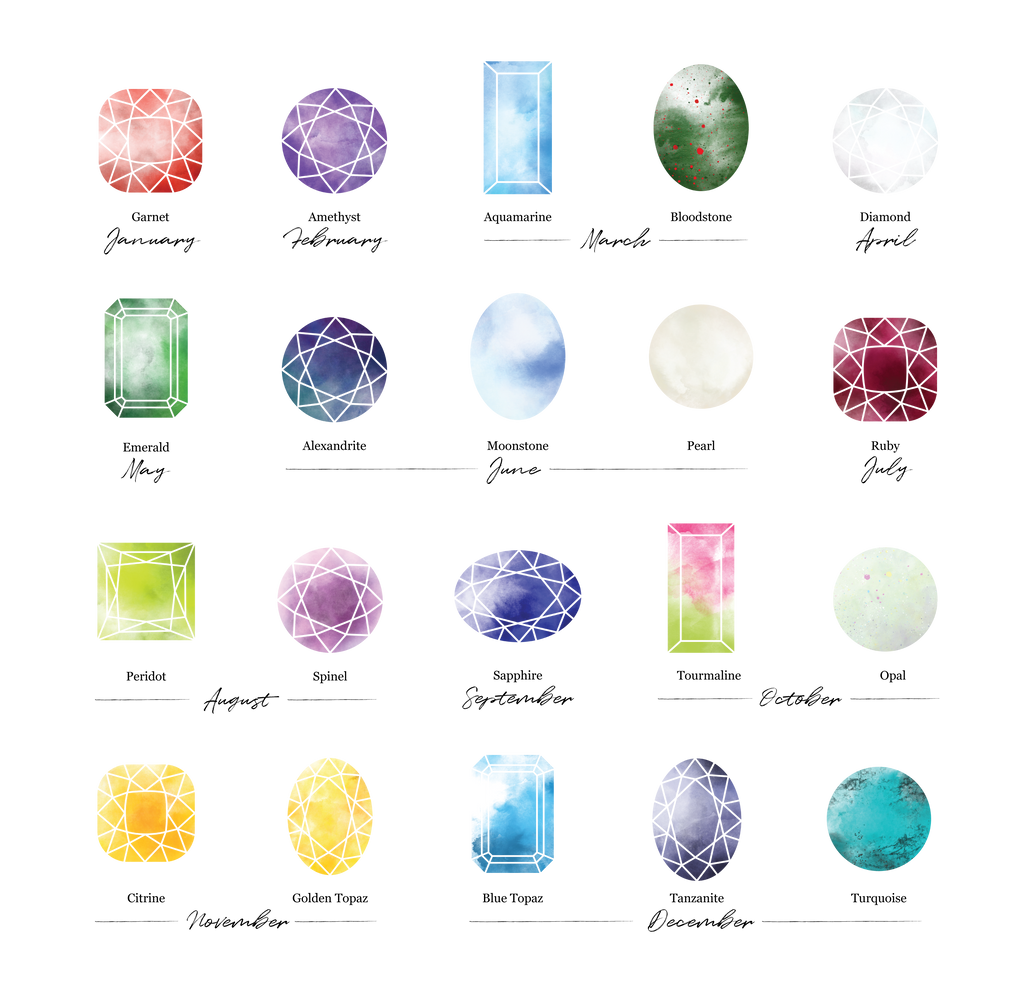 January
Modern & Traditional - Garnet
The birthstone of the month of January is garnet. While garnets are known for its fiery red color, they actually come in every color of the rainbow.

The garnet helps to build a strong sense of self-confidence upon wear. Aside from that, Garnets symbolizes love by bringing factors such as warmth, trust, honesty and understanding to relationships.

February
Modern & Traditional - Amethyst
The birthstone of the month of February is amethyst. Amethyst is a powerful and protective stone.

This stone increases nobility, provides a positive transformation and protects the wearer from all types of harm. It helps calm and stimulate the mind enabling you to be more focused in everything that you do.

March
Modern - Aquamarine
The modern birthstone of the month of March is aquamarine. The colors of aquamarine ranges from light blue to greenish blue which closely resembles the color of the sea.

Aquamarine invokes a sense of tranquility. It has also been a symbol of youth, health and hope for a Long time.

Traditional - Bloodstone
Bloodstones are generally green in color with speckles of red which gives off a mystical look.

It is believed that this gemstone allows the wearers to have courage and strength in everything they do. It also helps to sharpen sensitivity and willpower.

April
Modern & Traditional - Diamond
The birthstone of the month of April is diamond.

Diamonds have been said to provide better relationships and increase inner strength of those who wear it. It is also believed that diamonds bring about balance, clarity and abundance. Furthermore, diamonds symbolize eternal love.

May
Modern & Traditional - Emerald
The birthstone of the month of May is emerald. The emerald ranges from a beautiful bluish green to a deep to medium green.

Spiritual awareness, protection, love and wisdom have all been a symbol of emerald.

June
Modern - Alexandrite
The birthstone of the month June is alexandrite.

It is said to be a magical stone whereby it can determine the health of the person by changing its color. Alexandrite is thought to bring luck, good fortune and love to the wearer.

Modern - Moonstone
Another birthstone of the month June is Moonstone. Moonstones are found in opalescent, milky whites with variants of blue, gray, pink or green.

The moonstone represents new beginnings and it is a stone of inner growth and strength. On top of this, this stone cultivates empathy and compassion to the wearer.

Traditional - Pearl
The traditional birthstone of the month June is pearl. This stone is considered to be one of the world’s oldest gemstones. It is usually white in color but pearls come in different colors as well.

July
Modern & Traditional - Ruby
The birthstone of the month of July is Ruby. Ruby comes in a deep red shade and looks similar to the garnet.

However, this stone brings happiness and passion into the wearer’s life. This is why Ruby is perfect for gifting loved ones on occasions like Valentine’s Day or anniversaries.

August
Modern - Peridot
One of the birthstones of the month august is peridot.

Peridot is known as the stone of compassion. it is believed to bring good health, a good night’s sleep and peace to relationships by providing strength and balanced emotions. It also inspires creativity in the wearer.

Modern - Spinel
Spinels get their name from the Latin word “spina” which means “thorn” referring to their shape. They also come in different colors from vibrant pink to bluish green.  Not only do spinels encourage passion, devotion and longevity, they also help to release stress and anxiety.

September
Modern & Traditional - Sapphire
The birthstone of the month September is sapphire. The royal blue stone is a stone of wisdom, royalty and divine favor and is considered the gem of gems.

It is believed that sapphire wearers will receive protection, good fortune and spiritual insight. While being a symbol of power and strength, it also symbolizes kindness and wise judgement.

October
Modern - Tourmaline
The birthstone of the month of October is tourmaline.

The stone is associated with protection, grounding, health, happiness, luck and positivity. On top of that, many consider the Black Tourmaline to be the most powerful protective stone.

Traditional - Opal
Opal comes in many kinds of colors and is considered to be a precious stone. This stone is usually given to celebrate the 14th year of marriage.

It enhances its owners creativity and their conscious levels. It also provides positive feelings to their wearers.

This stone aligns with divine will. It helps instill faith which might help to bring all good things in life. It is also said that the Golden Topaz helps to attract beneficial people in life which will only benefit you.

Modern - Citrine
Citrines have been valued for their beauty and brilliance for a very long time. This stone is believed to bring about wealth, prosperity and success. Citrine is also believed to bring an energetic pick-me-up to the wearers.

December
Modern - Blue Topaz
The Blue Topaz stone brings about good communication skills. It is also used to enable wearers to express themselves. It is said that, if you are someone who is not accustomed to public speaking, by wearing the blue topaz, you will be able to choose the right words and speak more proficiently.

Modern - Tanzanite
Tanzanite allows you to grow your mind and soul. This gemstone awakens the wearer’s potential. It is a good gemstone for people who work alongside people a lot too as it provides a strong sense of mental stability. Furthermore, it helps to enhance different types of skills.

It promotes a much smoother communication among people. It is famous for its properties of healing. This gemstone allows you to be true to yourself and make decisions that are right for you.